Addressing sexual exploitation, trafficking in and smuggling of children in Caricom member states , 20 years after Stockholm.

Contributed by a member of the RISE Community • March 22nd, 2019 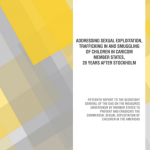 The Inter-American Children’s Institute (IIN), is a Specialized Organization of the Organization of American States (OAS) in policies related to childhood and adolescence. As such, the IIN assists the States in the development of public policies, contributing to their design and implementation from the perspective of promotion, protection and full respect for the rights of children in the region.
The First World Congress Against Commercial Sexual Exploitation of Children, held in Stockholm, Sweden, in 1996, was the event which positioned the issue of commercial sexual exploitation of children in the public eye for the first time. The Congress was organized jointly by UNICEF, the NGO Group for the Convention on the Rights of the Child and ECPAT International and drew more than 1,900 participants from over 130 countries, including: government representatives of 122 States, the United Nations, intergovernmental organizations, non-governmental organizations and a delegation of young people (FAPMI-ECPAT Spain, 2012).