Alone and unsafe: Children, migration, and sexual and gender-based violence

Contributed by a member of the RISE Community • March 7th, 2019 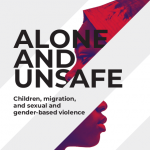 Protracted violent conflicts, devastating climate events, entrenched economic inequality, relentless persecution and crime, and other complex problems with no easy solutions drive millions of people every year to go in search of a safer and more dignified life. Among them are children, some with their families, but many without. These children face harrowing journeys and risk unspeakable suffering.
The number of children on the move, including those traveling alone, has grown substantially and alarmingly in the past decade. In 2017, it was estimated that at least 300,000 unaccompanied and separated child migrants were in transit in 80 countries – a five-fold increase from five years earlier. The number of children migrating alone worldwide right now is likely much higher.