Child Protection Handbook for Teachers, Administrators and Board Members

Contributed by a member of the RISE Community • December 10th, 2019 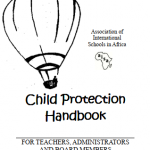 Child abuse and neglect – particularly sexual abuse – are among the world’s most serious concerns, with millions of cases reported to various children’s protective service organizations each year. It is estimated globally that 150 million girls and 73 million boys under the age of 18 have experienced forced sexual intercourse or other forms of sexual violence involving physical contact. Yet, it is also estimated that much abuse is under-reported either because the victims are afraid to tell anyone what has happened, or the adults who observe or suspect the abuse are unsure of what to do.