Contributed by a member of the RISE Community • February 21st, 2019 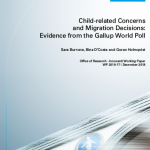 Current times are characterized by unprecedented migration levels: millions of people are on themove worldwide. Thus, understanding why people decide to migrate is a major goal of policymakers and international organizations, and migration has become a prominent issue on the global research agenda. Traditional migration drivers can be divided into reasons to leave (‘push’ factors) and reasons to migrate (‘pull’ factors), and include income deprivation, dissatisfaction with public services and institutions in the home country, conflict and war, climate change, and social networks abroad. In this paper, we focus our attention on children’s well-being as a potential migration driver. We investigate it by using the Gallup World Poll, a repeated cross-section data set of a survey conducted in more than 150 countries from 2006 to 2016.