ECPAT Iraq country overview: A report on the scale, scope and context of the sexual exploitation of children 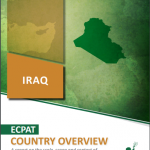 ECPAT Country Overviews are first and foremost, a desk review exercise that gather and present all the existing publicly available information into a comprehensive summary of all forms of SEC in a country. They do not contain any new primary data. They also provide an assessment of achievements and challenges in implementing counteractions – including the participation of children themselves – to eliminate sexual exploitation of children.
Iraq has a total population of more than 37 million, of which 47% are children. Years of conflict, including insurgency from the militant group Da’esh (also known as ISIL) and hosting up to 250,00 refugees from neighboring Syria, have exacerbated the range of risks that children face, including to sexual exploitation.