Contributed by a member of the RISE Community • September 9th, 2019 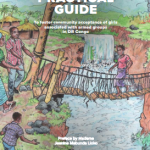 Guided by previous research by Child Soldiers International, recommendations to the DRC made by the Committee on the Rights of the Child, and consultations with Congolese NGOs, Child Soldiers International developed a project to assess the effectiveness of release, psychosocial recovery and reintegration programmes (DDR) for girls under the age of 18 associated with armed groups in eastern DRC. As part of this project, a research team spent six weeks in South Kivu, North Kivu and Haut-Uélé in early 2016, and interviewed 150 girls formerly associated with armed groups, as well as 84 members of community-based child protection networks (known as “RECOPE” in French), 12 teachers and school principals, 8 religious leaders, 46 DDR actors and 14 local authority officials. The study sought to shed some light on the extent to which girls benefit from DDR programmes, and on the appropriateness of the support where it was received – primarily from the point of view of the girls themselves.