Report of the Secretary General on conflict-related sexual violence. 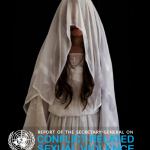 The present report, which covers the period from January to December 2016, is submitted pursuant to Security Council resolution 2106 (2013), in which the Council requested me to report annually on the implementation of resolutions 1820 (2008), 1888 (2009) and 1960 (2010) and to recommend strategic actions. Developments during the reporting period, including the rise in violent extremism and mass migration, drew attention to the attendant risk
of trafficking in persons for the purpose of sexual violence/exploitation. Among the perpetrators are hybrid criminal-terrorist networks, which have used the bodies of women and girls as a form of currency in the political economy of war.