Contributed by a member of the RISE Community • February 25th, 2020 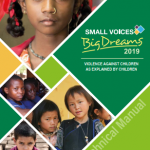 The Convention on the Rights of the Child (UN, 1989) determines that every child has the right to receive adequate protection and defines violence against children as “any form of physical or mental injury or abuse, neglect or negligent treatment, maltreatment or exploitation, including sexual abuse”. Violence is manifested in many ways, including physical punishment, but also psychological and emotional maltreatment; sexual harassment and abuse; labor exploitation, sexual exploitation and human trafficking; harmful practices, such as female genital mutilation and child marriage; bullying and cyber bullying; attacks in conflict zones, and many others. According to recent estimates by the World Health Organization (WHO, 2018) , every year almost 1 billion children in the world suffer from some kind of physical, sexual, emotional violence or neglect.