Trafficking Along Migration Routes to Europe: Bridging the Gap Between Migration, Asylum and Anti-Trafficking

Contributed by a member of the RISE Community • October 25th, 2019 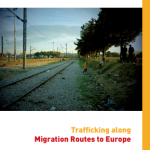 The years 2015-2016 saw an unprecedented increase in the numbers of people travelling by sea and overland along the migration route to the European Union (EU), with almost one and a half million people irregularly entering EU countries. This situation required frontline responders in these regions to be able to quickly identify and refer potential victims of trafficking in human beings (THB) among refugees, asylum applicants and migrants in an irregular situation. It also required the adoption of tailored protection and rehabilitation programmes for identified victims of trafficking among these people. This is particularly important for the protection of specific vulnerable groups, such as separated and unaccompanied children.