Uprooted: The Growing Crisis for Refugee and Migrant Children

Contributed by a member of the RISE Community • November 12th, 2019 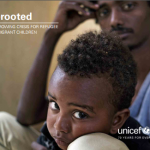 Around the world, nearly 50 million children have migrated across borders or been forcibly displaced – and this is a conservative estimate. More than half of these girls and boys fled violence and insecurity – 28 million in total. These children may be refugees, internally displaced or migrants, but first and foremost, they are children: no matter where they come from, whoever they are, and without exception. Children do not bear any responsibility for the bombs and bullets, the gang violence, persecution, the shriveled crops and low family wages driving them from their homes. They are, however, always the first to be affected by war, conflict, climate change and poverty. Children in these contexts are among the most vulnerable people on earth and this vulnerability is only getting worse. The number of child refugees under the United Nations High Commissioner for Refugees’ (UNHCR) mandate has more than doubled in just 10 years.