War on Women: Time for Action to End Sexual Violence in Conﬂict 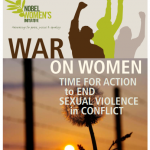 Sexual violence in conﬂict is not a new phenomenon. The saying goes that “rape is as old as war itself” and women have had the battleﬁeld played out on their bodies for centuries around the world. But the wars in Bosnia–Herzegovina and Rwanda in the 1990s were a turning point. These conﬂicts brought about the term “rape as a weapon of war” as rape was carried out systematically, and was strategically used as a war tactic. Horrendous accounts of atrocities were documented and reported, and survivors spoke out about their experiences of gang rape, rape camps, rape slavery and forced pregnancy. The accounts not only fueled global outrage and condemnation, but also spurred the international community to deﬁne the issue of sexual violence in conﬂict as a serious threat to peace and security.