What Works to Prevent Sexual Violence Against Children: Evidence Review

Contributed by a member of the RISE Community • November 25th, 2019 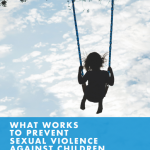 Sexual violence against children, which includes anyone under the age of 18, is one of the largest silent global pandemics of our time, occurring in countries at all levels of development and affecting children of all ages. Sexual violence consists of a range of sexual acts against a child, including but not limited to child sexual abuse, incest, rape, sexual violence in the context of dating/intimate relationships, sexual exploitation, online sexual abuse, and non-contact sexual abuse. Until recently, very little was known about the true nature of sexual violence against children. However, over the last two decades, a growing number of research efforts to document and understand the dynamics and prevalence of sexual violence against children have started to shed light on its magnitude and consequences. Historically, a great deal of the research has focused on high-income countries (HICs), but significant progress has been made in low and middle-income countries (LMICs). The evidence emerging demonstrates that prevention interventions can make a difference.